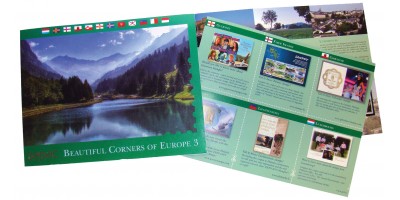 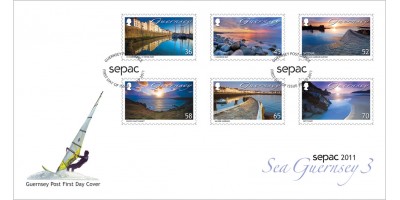 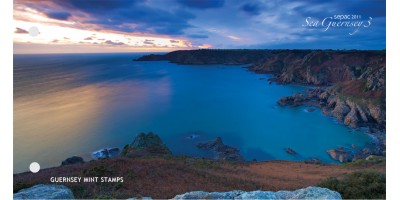 For SEPAC 2011 we have, for the final time in the Sea Guernsey series, showcased some of the beautiful scenery which can be found on the island's rich and varied coastline; each depicting a real place which can be enjoyed by those living in, or visiting, Guernsey.

For many, St Peter Port is the most attractive destination in the Channel Islands, particularly when arriving by sea. Those fortunate enough to arrive on the island by yacht or power boat may use Victoria Marina (36p) which lies within the harbour at St Peter Port.

With the sky lit up beautifully, L'Ancresse Bay (45p) is one of the biggest - and some would say most stunning - bays on Guernsey. Located on the north of the island, the water is perfect for windsurfing, surfing, sailing, sea kayaking and even fishing.

Bearing the SEPAC inscription is the image of Bordeaux Harbour (52p), a small fishing port which is a popular haunt with fishermen and divers found in the north east of Guernsey.  In the foreground is the cobble-like slipway, which enables boats to move to and from the water.

Guernsey's south coast features many breathtaking bays, such as the one depicted on the 58p stamp, which has been captured at sunset.  One of the best known bays is Moulin Huet, a rugged, stunning bay which was a favourite of the French Impressionist Pierre-Auguste Renoir.

Close to St Peter Port is the attractive Salerie Harbour (65p), which is named after the practice of salting fish and has retained much of its charm.  As the image depicts, framing the harbour is a number of Heritage listed period houses that typify the area.

Beautifully captured, Petit Port (70p) is certainly one of the most spectacular of the south coast beaches.  It enjoys plenty of sunshine and features deep, pure sand. Close to the Jerbourg Monument, Petit Port lies at the bottom of cliffs and can only be reached by a climb down of over 270 steps.