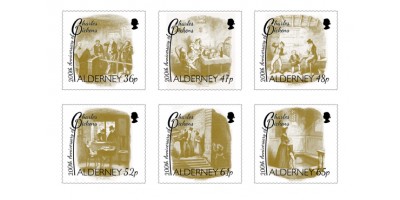 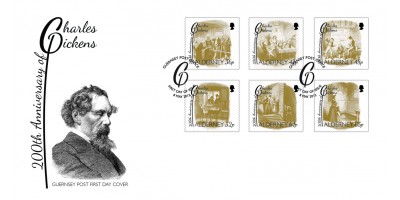 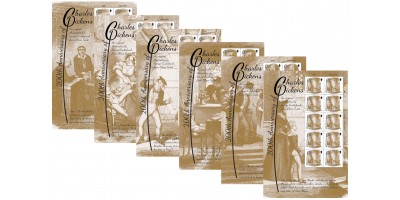 Charles Dickens is undoubtedly one of the most celebrated authors of all time.  His appeal shows no signs of fading more than 140 years after his death, with his books remaining in print all around the world.

We have chosen to commemorate the 200th anniversary of the birth of Charles Dickens with stamps depicting original illustrations from Oliver Twist by George Cruikshank (1792-1878), one of the artists with whom Dickens personally collaborated.

One of the greatest illustrators of his time, Cruikshank came from a family of artists. At the height of Cruikshank's fame as a caricaturist, the publisher John Macrone (1809-37), suggested that Dickens' sketches should be put together in a book, illustrated by Cruikshank. The result was Sketches by Boz, which was published in 1836.

Dickens worked in close collaboration with his illustrators, supplying them with a summary of the work at the outset for the cover illustration, which served as a wrapper for each of the monthly parts. His works were all issued serially, in monthly or weekly parts.

Dickens' close working relationship with his illustrators is important, as the illustrations provide some insight into the characters as Dickens described them to the illustrator and approved when the drawing was finished. They also give some clues as to which scenes Dickens felt were important and should therefore be illustrated.

After Dickens' death Cruikshank claimed that the plot and many of the characters from Oliver Twist had been his idea, which was vigorously denied by John Forster, Dickens' friend and biographer.

Only two of Dickens' major works, Hard Times and Great Expectations, were issued originally without illustration.