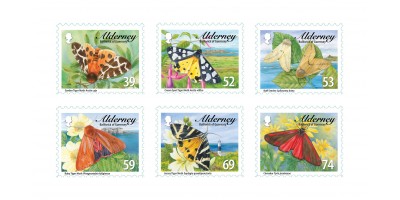 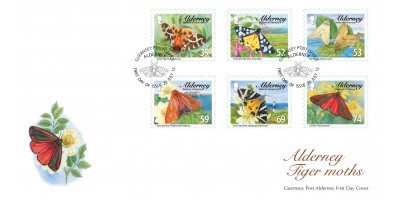 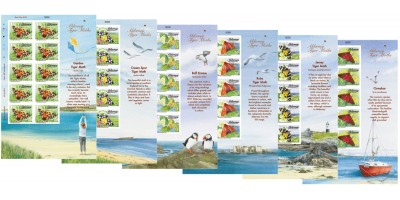 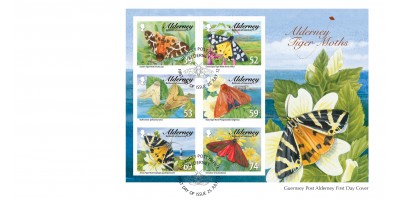 Beautifully illustrated by renowned international artist Petula Stone, our stamps feature six of the distinctive Tiger Moths which can be found in Alderney and are a wonderful edition to our Alderney Invertebrates series.

David Wedd of the Alderney Wildlife Trust has helped us to compile some interesting facts and little-known observations about Tigers which occur on the island:-

One of the four aposematic tigers, the Cream-spot Tiger, has scared off the chickens at Essex Farm which will go to great lengths to avoid this species, which is common at this location.

David has observed that although birds often take moths off walls and trees near light traps, they hardly ever touch Jersey Tigers, which frequently settle outside the traps instead of going in. Birds sometimes try to catch flying Jersey Tiger moths, but David has never seen a settled one being pestered.

The Jersey Tiger caterpillars are rarely seen, despite being very brightly coloured. Although this nocturnal larva feeds quite openly on its food plants, in torchlight it is surprisingly well camouflaged.

The black or brown hairy caterpillars, which are associated with Garden, Cream-spot, Ruby Tigers and Buff Ermine, move very quickly when looking for somewhere to pupate. Cuckoos seem to be the only birds that will eat them - the hairs don't put them off at all, and they love the toxic larvae of Brown-tail Moth - and parasitic wasps appear to destroy them in numbers. On the other hand, Cinnabar caterpillars feed quite openly by day and they do not have much parasitism.

Almost as common as the Buff, the White Ermine is particularly suited to the name, as it is white with black spots, as is the female of the Muslin Moth, which is also very common in Alderney. The male, though, is grey with black spots. The normal form of Buff Ermine is quite ermine-like, and very fluffy, although it is pale yellow. The Water Ermine, which is also white, does not occur in Alderney.

Garden Tigers, in particular, have an extra device for avoiding bats, which would not be put off by an aposematic tiger. Bats use echo-location to find flying tiger moths, which, in turn, use their own echo-location to know where bats are, and can literally drop out of the sky into the undergrowth if the animals get too near!

With special thanks to the Alderney Wildlife Trust