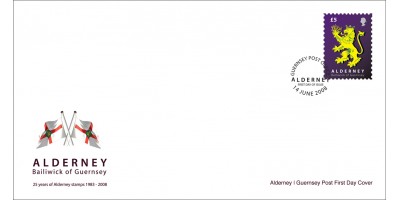 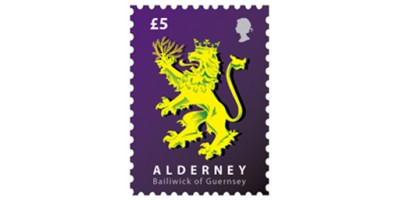 The third-largest of the Channel Islands, this year Alderney celebrates 25 years of issuing stamps. As you might expect, the first set of definitives – 17 of them – gave the world a pictorial look at the island, courtesy of the designer, Gordon Drummond. The illustrations ranged from a map to some beaches and from a lighthouse to a lifeboat.

Since that first issue, the stamps have continued to reflect the character of the island, with subjects including its military history (regiments that were garrisoned there and the forts which they manned), ships (both naval and civilian) and wildlife (mainly birds, but also marine life).

This year a set of commemoratives based on the first definitives was issued, with the designer revisiting the sites chosen by the original artist, but capturing the images on camera.

In addition to these, a £5 definitive and £5 silver stamp replica, a wafer-thin piece of solid silver– a first for Guernsey Post and the British Isles were produced. Bold and clear-cut, the design of both the paper stamp and the silver stamp replica features nothing but the lion rampant from the island’s flag (along with the standard features: value, Queen’s head and the island’s name, of course).

The lion has been redrawn by the designer, Andy Fothergill, who has brought a contemporary touch to it without straying too far from tradition. This is a handsome beast, a crown on its head and holding a sprig of broom.

The lion is a popular inclusion in coats of arms, national flags etc, and the reason for that is simply its reputation as the king of the jungle, the mightiest of all creatures and therefore a symbol of strength and power with which people generally want to be associated.

In addition to being a common plant in Alderney, broom has great significance in British heraldry. Its medieval name is planta genista, which is the origin of Plantagenet, the family name given to descendants of Geoffrey of Anjou (father of Henry II of England), who is said to have worn a sprig of broom in his hat when going into battle, so that his troops could see where he was. The plant was also adopted as the badge of Brittany.