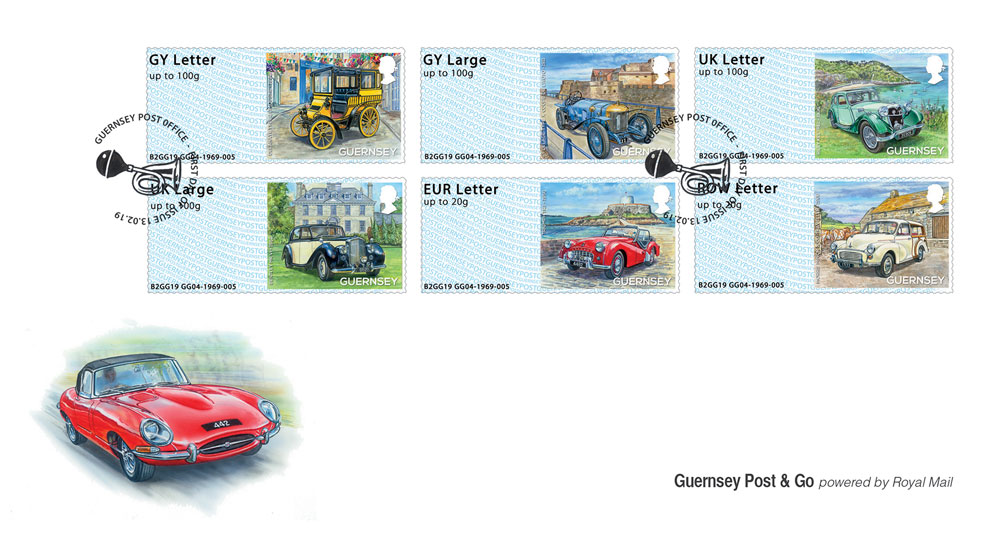 Guernsey Stamps announces that it will mark the 50th anniversary of the Guernsey Old Car Club with the release of a new set of Post & Go stamps at the Spring 2019 edition of Stampex.

Bridget Yabsley, head of philatelic at Guernsey Post said: - “In 1969 car enthusiast Geoffrey Sandwith moved to Guernsey with his family, initially bringing four of the cars from his large collection in England - an Austin Nippy, two Bentleys and a Lea Francis.

“There was a good deal of interest in Mr. Sandwith’s cars and, following the suggestion for the formation of a car club in the local media, Guernsey Old Car Club was born. Today, the Club is a vibrant organisation offering a wide variety of social events, including biennial excursions to France or to Jersey.”

Emile Delahaye founded his automobile works in 1894 and the company produced several models of motor car and commercial vehicle. The illustrated motor car is one of very few surviving Victorian limousines.

The Kestrel was one of a large number of various specifications from the Riley factory, which finally proved to be too much for the finances and caused the company to be absorbed into the Nuffield Organisation in 1938.

Bentley Motors was established in 1919, but in 1931 was taken over by Rolls Royce. The model depicted was the first Bentley to be produced with a standard factory-built body.

The TR3 was the third manifestation of the Triumph sports car with the Standard Vanguard engine.

One of its most iconic models of this hugely successful British motor manufacturer was the universally popular Morris Minor designed by Alex Issigonis.

The stamps will vend from Guernsey’s GGO1 Post & Go machine at the spring edition of Stampex in London (13-16 February 2019) and the GG02 machine at Envoy House. The Presentation Pack and First Day Cover will be available at the philatelic bureau’s exhibition stand 78 and may also be preordered from 30th January by visiting www.guernseystamps.com or by contacting the bureau on +44 (0) 1481 716486.