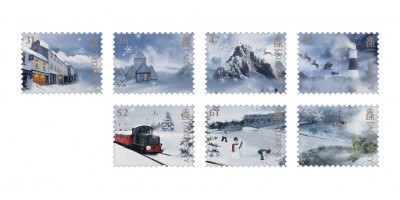 Set of Seven Stamps SOLD OUT 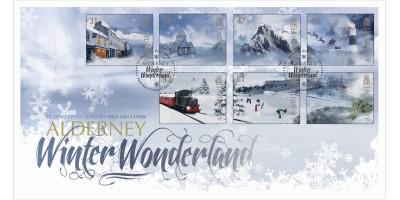 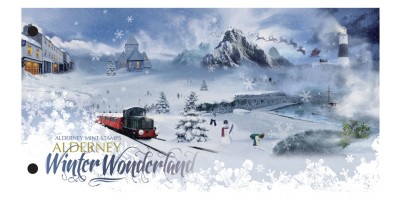 It was Christmas Eve and Alderney had woken up to a magical stillness and hush. As the Islanders pulled open their curtains, a blank canvas awaited them to be filled with festive fun. Victoria Street was a scene from a Dickens' novel, its cobbles sugar-iced in snow and its street lamps casting pools of golden light against the colour-washed houses.

Down at the harbour, the still waters looked like a skating pond, snow formed into drifts beside the quays and the colours of the fishing boats faded away like old photographs.

On the horizon, dark clouds brooded, lead-grey and ominous. By nightfall, the stillness of the day had been replaced with gusting winds and lashing sleet. Doors were closed and fires banked up. Hot toddies were poured to smooth the last-minute wrapping of presents and stockings were fastened to mantlepieces by excited children.

As the weather worsened, the mournful sound of the foghorn at Mannez Lighthouse caught the wind and the tower's beam of light reached out to the turbulent sea.

Overhead, Father Christmas sailed above the weather in his sleigh and searched for the beautiful Island he knew lay beneath. A gap in the snow clouds opened and he gazed at Alderney as if looking upon the face of a well-loved friend.

As the sleigh descended onto the long stretch of Braye common, Father Christmas heard a loud crack on the starboard side and the vessel lurched to the right before coming to rest in a large snowdrift.

"Ho! What's this, my lovelies?" he called to his reindeer. Stepping off the sleigh, Father Christmas could see the problem immediately: one of the runners had split in two. Weighed down with hundreds of presents there was no way he would be able to mend it on his own.

He looked around to see if help was at hand. Orange squares blinked out of the darkness and strings of festive lights adorned porches and garden fences but not a soul was about. The old man's spirits were beginning to fall when to the west he noticed a bright light drawing closer and into view chugged Elizabeth, the Island's pretty diesel engine, with the two London Underground carriages she pulled. They had finished their Christmas Eve train ride for local families and were heading back to the shelter of their shed at Mannez Quarry.

Father Christmas had an idea so he set to work. In no time at all, the sleigh was empty and the railway carriages had been transformed into vibrant grottos stacked high with presents and treats. He fastened his reindeer to the front of the little green engine and then up, up and away they flew! The strange craft soured into the night sky and as they rose above the pretty town of St Anne, the winds dropped and the sound of carols drifted up from the church at its centre, it's stained glass windows blazing with jewel-like hues.

On Christmas morning, their stockings unwrapped, the Island's children gathered for a snowball fight. They may have noticed the extra large snowdrift half way along the common, but it would be the New Year before the mysterious sleigh was revealed. Another Alderney Legend would be born.