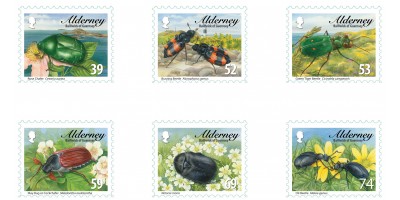 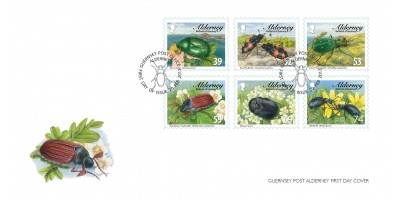 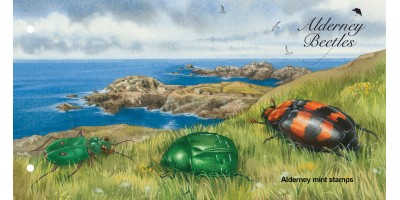 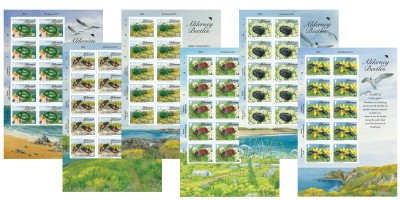 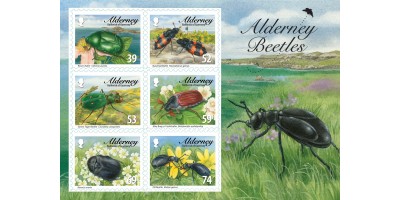 As part of our invertebrates series we are delighted to feature some of the beetles which can be found in Alderney, which have been wonderfully illustrated by renowned international artist Petula Stone.

Alderney boasts a great number of beetles thanks to the Island’s incredible range of habitats in a very concentrated area.

Here we look in more detail at two of the six beetles depicted on the stamps: the oil (Meloe genus) and burying (Nicrophorus genus) varieties.

In the last hundred years, half of the UK’s native species of oil beetle have disappeared and only four remain – one being extremely rare.

Growing up to three centimetres long, the oil beetle’s life history is particularly fascinating - and rather gruesome.  The female oil beetles dig burrows to lay their eggs and their larvae rely on nearby vegetation to complete their strange life cycle.

Once the larvae hatch they crawl up onto vegetation and wait on a flower head to hitch a ride back to the bee’s nest where they eat the bee’s eggs and its store of nectar and pollen.  It has to be the right sort of bee, though, which most aren’t, which explains why the female beetle lays so many eggs. If three per thousand make it, the bee has done well and the population rises.

Of the many species of burying – or sexton – beetle, several can be found in Alderney. These creatures use their large antennae to detect a dead animal from a very long distance. After finding the carcass of perhaps a small bird or mouse, the beetles fight until the winning pair – or occasionally a solitary female beetle, which later attracts a mate - remains.

The prospective parents begin to dig a hole below the carcass. While doing so, the beetles cover the animal with antibacterial and antifungal secretions; this delays the decay of the carcass and prevents the smell of rotting flesh which would attract competition. When the burial is complete – a process which can take up to eight hours – the adults strip off the fur or feathers. The female then lays the eggs in the soil nearby where they hatch after a few days. The larvae are able to feed on their own, but to speed their development the parents digest the flesh and regurgitate the liquidised food. If there are too many larvae for the size of the carcass the parents may reduce the number to suit.  Parental care is quite rare amongst insects and the burying beetle is a remarkable exception.

With special thanks to the Alderney Wildlife Trust