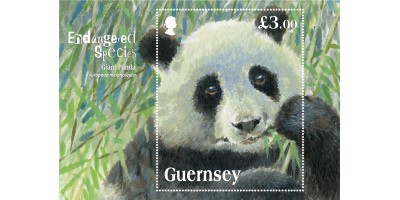 A small sheet containing one stamp set against an illustrated background... 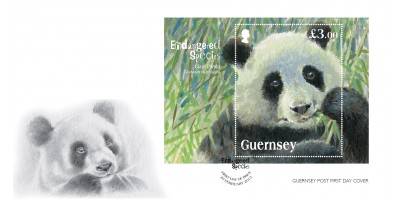 The Philatelic Bureau offers a first day cover service in respect of all stamp issues. A set of stamps is affixed to an unaddressed, specially designed envelope and it is cancelled with a special p.. 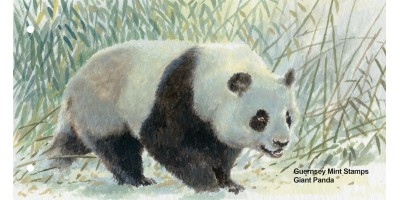 There is only one species of Giant Panda. A member of the bear family, the Giant Panda is the only species in its genus. The animals have the digestive system of a carnivore, but have adapted to a vegetarian diet.

They depend almost exclusively on bamboo as a food source and can eat up to 80 pounds of this fibrous plant in just one day. Classified by the IUCN as Endangered, the most recent study of Giant Pandas and their habitat revealed there are only around 1,600 left in the wild.

Peaceful and secretive creatures, Giant Pandas have steadily lost their forest habitat to China’s expanding human population. These striking animals, which were once widespread in southern and eastern China, are now confined to fragmented forest patches high in the southwestern mountains.

Restricted and degraded habitat is the greatest threat to Giant Pandas. The animals’ range has contracted due to the conversion of forests to agricultural areas, poaching, and large-scale development activities such as road and rail construction.

Because of China’s dense human population, many panda populations are isolated in narrow belts of bamboo no more than 1.2km wide — and panda habitat is continuing to disappear as settlers push higher up the mountain slopes.

A further threat to pandas relates to their reliance on bamboo for food. Bamboo is subject to periodic ‘die-off’; before the significant human encroachment of their habitat, pandas could move to areas with healthy bamboo when a die-off occurred, however moving to alternate habitats may not now be so easy.

As China’s economy continues its rapid development, it is more important than ever to conserve the forest home of the Giant Panda — not just to safeguard this iconic species, but also to maintain the natural resources essential to sustain the people of China.