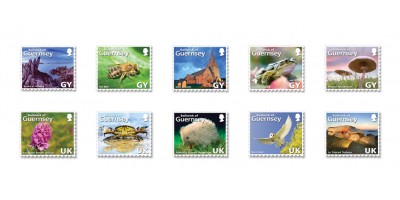 Formed in 1882 to encourage the study of history, natural history, geography and geology of the Bailiwick of Guernsey, La Société Guernesiaise has been a prime instigator in the conservation of the islands' natural environment and in the preservation of their historic buildings and monuments. Nowadays, 125 years after its inception, La Société owns or leases 50 separate areas of land, which totals 400 vergees (177 acres). As well as these areas of outstanding natural beauty, La Société manages important areas of land for the island’s government, the States of Guernsey, and became incorporated by Order in Council in January 2004.

Cobo granite at Albecq is one of the island's younger rocks and was formed approximately 500 million years ago. The rugged beauty of this coastline made it a particular favourite of the exiled French writer, Victor Hugo. The Ivy Bee Colletes hederae was only recognised as a distinct species about 20 years ago and is abundant in the island during the autumn. The Vale Church stands on the site of a priory belonging to the Abbey of Mont St Michel, which once owned half of the island. The graves in the churchyard are often used as evidence by the family history section. The Common Frog Rana temporaria is one of two species found in the island. Because of the Bailiwick's mild winters, its spawn can be found by New Year's Day. Parasol Mushrooms Macrolepiota procera are common in the island in autumn, especially on L'Ancresse Common on the island's west coast.

The Southern Marsh Orchid Dactylorhiza praetermissa is one of four species found in La Société’s nature reserves studied by the nature conservation section. The Shore Crab Carcinus maenus makes its home on rocky beaches throughout the Bailiwick and is studied by the marine biology section. Blonde hedgehogs Erinaceus europaeus have a rare recessive gene giving rise to attractive creamy-coloured spines. They are extremely rare except in Alderney. La Société has put up over 400 owl and kestrel boxes around the island to provide nesting sites for island residents such as the Barn Owl Tyto alba. Finally, Le Trépied Dolmen at Le Catioroc is so called because of its three capstones. Folklore records it as a place where witches met on Friday nights.