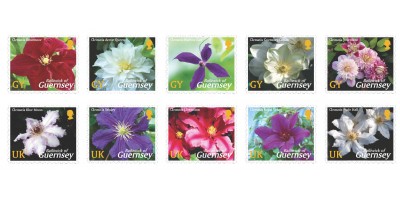 2004 was a very imporatnat year in horticulture as the Royal Horticultural Society, the Uk's leading gardening charity, celebrated its bicentenary with a feast of special events and activities for gardening enthusiasts of all kinds. As part of these celebrationsthe RHS Bicentenary Plant Collection was launched at the 2004 Chelsea Flower Show; which included four new clematis cultivars raised in Guernsey by Raymond Evison. The new clematis were named after the four RHS gardens Wisley, Rosemoor, Hyde Hall and Harlow Carr, a great honour for the island.

In 1985 Raymond Evison OBE, VMH, founded The Guernsey Clematis Nursery. The nursery grew rapidly and is now the leading producer of young clematis plants in the world.

The clematis featured on this set of self-stick stamps have all been bred or developed in Guernsey by Raymond Evison.